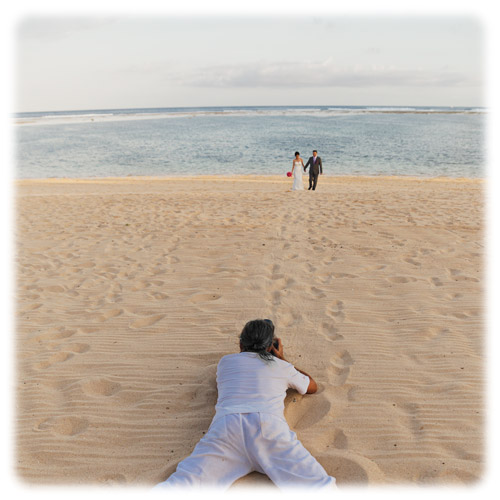 Here is my story !

Because at some stage I felt I was not progressing ‘artistically’. And besides, I wanted to explore new styles and change the way my cameras sees and tells the story of a wedding.

All this coincided with a life-changing visit to the studio of a retired wedding photographer who had his heydays long before digital cameras came up.

He rose to fame during the 80ies and early 90ies. A time when photographs were still made by skilled artisans and not by mere ‘shooters’ and ‘clickers’ and their instant software.

So I said to myself: I want to also create such photographs.

At first, I thought: I have to go back and shoot weddings on film. But I soon discovered that there was one problem.

What problem ? Cost, my dear !

Let me explain: Nowadays it is not uncommon for wedding photographer + assistant photographer to come home from a typical wedding with 1500 – 2000 photos, or more. Using film the cost for this would be  2000 – 3000 USD. Again, this is the cost for film only.

If you factor in other costs and the fact that for a viable business a profit is also necessary I concluded I would need to charge clients over 5000 USD for a wedding. Would you want to pay that ?

Very few brides in Bali would want to spend that kind of money on their wedding photographs.

So I was faced with a dilemma: On one side I wanted to create ‘old skool’ photographs, but on the other side there was no way that you guys would want to pay that much money.

How to photograph digitally but make it look like its film ?

As it turns out that is actually not that difficult. Nowadays plenty of ways exist that can faithfully produce the look & feel of photographs shot on film. Up to a point where digital photographs can be indistinguishable from analog photographs.

Yeah ! I got that one covered.

But that’s not the whole story ! And in my opinion, this is where many digital ‘shooters’ & ‘clickers’  fail. Resulting in life-less, boring digital images. Which are all too common these days.

Was I also to fail?

How come ‘old’ wedding photographs have so much more emotional quality ?

One major difference between now and then is that in the old days of analog cameras film and film processing was expensive. That in turn, forced photographers to much more think before they pressed the shutter.

This thinking and anticipating moments is an art-form that is almost lost. These days it is ‘spray & pray’ photography. Shoot as many photographs as possible and hope that some useful material will be there.

To a large extent this approach actually works. Looking back at a career of over 12 years as a photographer I can attest to that.

But, photographs made with this approach will often lack authenticity and ‘emotional quality’.

So meticulously I retrained myself to focus my attention on moments & emotions.

I slow down so much more and focus on what really makes an image great.

That is what my photography is about. That is my style.

So, eventhough my career as a wedding photographer spans over 12 years the ‘Michelle Pastel’ way is something I started to practice since the last few years only.

This way has made me fall in love again with my craft and has rekindled my passion for capturing those life-defining moments that matter most.

That is what I call: EMOTIVE PHOTOGRAPHY !

I leave it up to you to see for yourself whether I succeeded in my quest to create photographs which have the power to bring you back in time and let you re-experience your wedding day as it was.